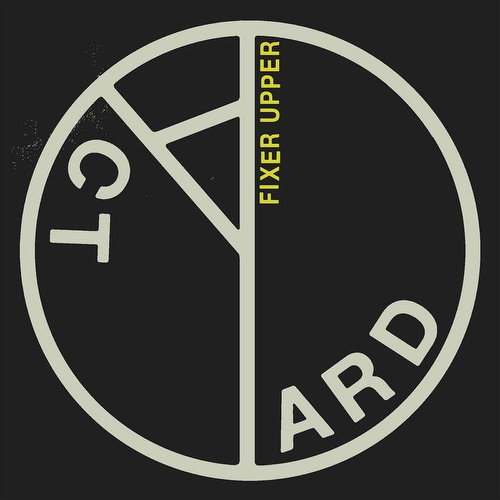 Formed in 2019, Yard Act began life when friends Ryan Needham (Bass) and James Smith (Vocals) started creating minimalist rock tracks using a primitive drum machine and borrowed bass guitar. Later drafting in George Townend on drums, and Sammy Robinson on guitars whom they met at their spiritual home The Brudenell Social Club, they played a handful of shows to a rapt reception before you-know-what intervened. No matter: ingenuity and artistry enabled them to great their debut release.

Overflowing with satirical one-liners, A side ‘Fixer Upper’ follows a cocksure fictional character, ‘Graeme’, planning some home renovations. Yard Act co-instigator Smith explains: “Graeme was inspired by an amalgamation of people who lived on my street growing up. I think everyone knows a Graeme, maybe a neighbour or an uncle… sorry if he’s your dad. Not a bad man at heart, he just sincerely believes he’s from a country and generation that achieved the apex of everything so therefore can’t ever be wrong about anything.” Drafting in Ross Orton (who’s credits include Arctic Monkeys, Working Men's Club’s, MIA, Amyl & the Sniffers) on mixing duties, it is equal parts fearsome and funny and never less than breath-taking.

On the flip side, ‘The Trapper’s Pelts’ is a satirical take on neoliberalism. James Smith explains, “It skewers elements of the American frontier into a Scarface-type narrative set against the backdrop of a mundane West Yorkshire suburb.” Produced by Bill Ryder Jones (The Coral) prior to lockdown the recording process of the track “felt like a Happy Mondays thing, keeping the drums tight and high up in the mix like a dance mix.”

Housed in a screen printed wraparound sleeve (individually printed by Ryan from the band), it’s a debut single to be treasured.