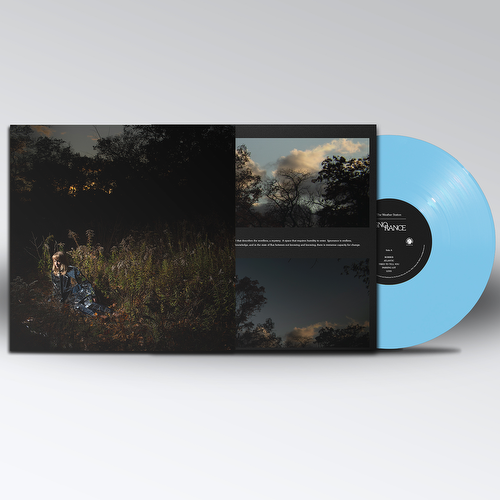 ''Dinked Edition' is on 'evergreen' coloured vinyl, includes a signed 12" x 12" print. Foil-numbered /300. For avoidance of doubt, the centre is a standard spindle size, and not dinked.

Through Ignorance, Lindeman has remade what The Weather Station sounds like, using the occasion of a new record to create a novel sonic landscape, tailor-made to express an emotional idea. Ignorance is sensuous, ravishing, as hi-fi a record as Lindeman has ever made, breaking into pure pop at moments, at others a dense wilderness of notes; a deeply rhythmic and painful record that feels more urgent and clear than her work ever has.

Ignorance began when Lindeman became obsessed with rhythm; specifically straight rhythm, dance rhythm, those achingly simple beats that had never showed up on a Weather Station album before. The album marks Lindeman’s first experience writing on keyboard, not guitar, and her first time building out arrangements before bringing them to a band. Montreal producer Marcus Paquin (Arcade Fire) co-produced, with Lindeman, and also mixed the record.

The lyrics across Ignorance roil with conflict. The narrator confronts characters who turn away from love. “I used to be an actor, now I’m a performer,” Lindeman says. In those roles she often finds herself to be the subject of projection, reflecting back the ideas and emotions of others. In turn, the album cover shows Lindeman laying in the woods, wearing a hand made suit covered in mirrors. Throughout Ignorance, she sings of trying to wear the world as a kind of ill fitting, torn garment, dangerously cold; “it does not keep me warm / I cannot ever seem to fasten it” and of walking the streets in it, so disguised and exposed.