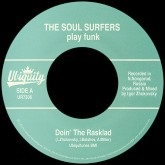 Heavy Funk 45 specialists, The Soul Surfers drop a new 7in single “Doin’ The Rasklad b/w Girl From Sao Paolo”. It will be pressed in limited quantities and is prepped to be another highly collectable and sought-after 45 from the Russian collective.

“Doin‘ The Rasklad” literally translates to “Doin’ The Strut” or “Doin The Thang” is a drum and bass heavy track with a grooving organ and plenty of chicken-scratch guitar. It has all the elements to be a dance-floor burner and a bonafide deep funk bomb.

On the flip side we have The Soul Surfers playing Jazz, "Girl From Sao Paolo" is their take on a latin and Brazilian styled groove with deft piano playing throughout. But it wouldn‘t be a proper Soul Surfers release without some heavy drums which weaves in and out of the song and keep’s things “funky”.

The Soul Surfers have released numerous limited singles through Detroit’s Funk Night Records with each becoming highly collectable in the “45 Funk Community”. Formed in Nizhny Novgorod which could be argued as Russia’s own version of Detroit with the Volga automobile plant as its main source of industry. Heavy “Detroit” style funk made 30 years later in Russia’s own Motor City couldn’t be more fitting. The gritty, industrial sound emanates from the music and is aided by vintage Soviet mics, amps, and instruments. All songs are recorded live in one take creating the “rough”, “garage”-like feel of the tracks that only add to their uniqueness and authenticity.

More Items From The Soul SurfersSee all 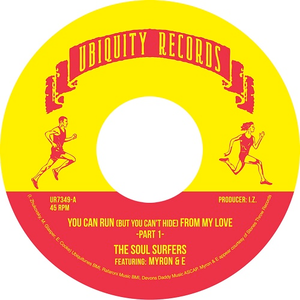