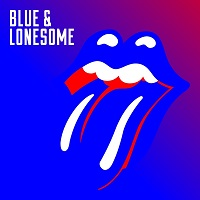 First album in over a decade from The Rolling Stones and seems them return to their blues roots!

This is an album full of their passion for the music that has always been at the heart and soul of the band – Blues. Recorded in three days in December last year at British Grove Studios in West London. ‘Blue & Lonesome’ sees the Rolling Stones tipping their hats to the blues roots with tracks of intense spontaneity. It’s hard to believe that this is a record made by musicians in their sixth decade of recording.