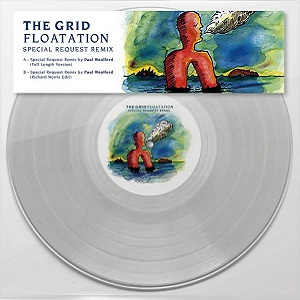 Formed in the late 1980’s at the dawn of acid house, The Grid released their first single ‘Floatation’ via Warners in 1990. It was instantly celebrated as a groundbreaking slice of ambient house, and soon became regarded as an all-time Ibiza Balearic classic.

The track featured in the cult documentary ‘A Short Film About Chilling’, and has been included on dozens of compilations since release, including Paul Oakenfold’s seminal Goa mix.

Fast forward to now. DJ Paul Woolford, a long-time fan of the track, steps into the studio and produces a 13 minute epic re-rub under his Special Request moniker, a widescreen soundscape for the dancefloor and the mind. “I had one of the best sessions in the studio ever”, he commented. The track is now set for release on deluxe 12” clear vinyl via new label Chemical Alley. A digital release with additional remixes will also follow.

The Grid went on to tour the globe, and had a run of ten UK chart singles, including the million selling ‘Swamp Thing’. They are currently in the studio working on brand new material, as well as a retrospective ‘Best Of’ album, including all their single releases, key remixes and deeper cuts.

The Grid are Dave Ball (Soft Cell) and musician and producer Richard Norris, also known for his work as Beyond The Wizard’s Sleeve.

More Items Related To The Grid