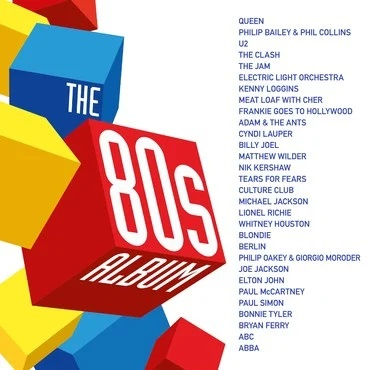 The 80's album celebrates the diversity of the decade across 2 LPs of 30 tracks including 12 UK #1 Hit Singles and key tracks that have deservedly achieved legendary status. Just as much an essential self-purchase as well as an amazing gifting opportunity.

Side One features smashes from Queen with Another One Bites The Dust, Philip Bailey and Phil Collins Easy Lover and Meat Loaf duetting with Cher on Dead Ringer For Love alongside New-Wave hits from The Clash Rock The Casbah, The Jam Start, U2 with the amazing New Year’s Day and pop-rock radio staples from Electric Light Orchestra Hold On Tight and Kenny Loggins’ theme from Footloose.

Side Two represents the best in pure pop from Frankie Goes To Hollywood with the 80’s anthem Two Tribes, Billy Joel’s irresistible Uptown Girl, alongside Adam and The Ants, Tears For Fears, Cyndi Lauper, Nik Kershaw, Matthew Wilder and the first #1 from Culture Club Do You Really Want To Hurt Me.

Side Three kicks off with 3 of the most danceable mega-hits of all time by 3 of the biggest superstars ever - Billie Jean from Michael Jackson, All Night Long (All Night) from Lionel Richie and Whitney Houston’s I Wanna Dance With Somebody (Who Loves You) - and then presents 3 of the biggest movie themes ever from Blondie with Call Me, Giorgio Moroder and Philip Oakey with Together In Electric Dreams and the iconic Take My Breath Away from Berlin and then finishes with the brilliant electro-pop of Steppin’ Out from Joe Jackson.

Side Four is all about the best of the best, kicking off with the beautiful Blue Eyes from Elton John, Pipes Of Peace from Paul McCartney and Paul Simon’s classic The Boy In The Bubble. Bonnie Tyler’s Total Eclipse Of The Heart was one of the decade’s biggest global hits and Slave To Love from Bryan Ferry sounds as fresh today as it did in the mid-80s. The final two tracks define timeless, sophisticated pop and are a fantastic sign-off from this album with ABC’s epic All Of My Heart and to finish, the simply stunning The Day Before You Came from ABBA.