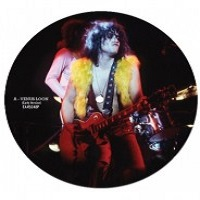 Latest of the alternative T.Rex singles has a slightly different twist as this was rumoured to be scheduled but never ended up being released as a single. In red house bag. 500 copies on red vinyl & 500 picture discs. The last recordings of the classic line up of T. Rex {Marc Bolan, Steve Currie, Mickey Finn, Bill Legend) and with Tony Visconti producing. Recorded whilst on tour in the U.S. The released version of ‘Til Dawn’ (which was left off the forthcoming Zinc Alloy LP and included in the following ‘Bolan’s Zip Gun’ Lp in 1975) had new drummer Davey Lutton’s drums dubbed over the top. These recordings are from Marc’s own tapes (part of the material stolen from his & Gloria s house and now repatriated with the estate).

More Items From T.RexSee all