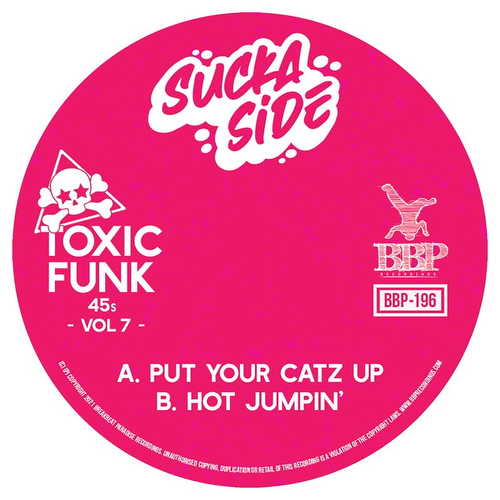 Breakbeat Paradise Recording has no plan on slowing down the steady flow of hot 7-inch vinyls in the epic Toxic Funk-series. On the 7th installment of the series we seeing a new crew called Suckaside taking on the scene of funky street edits by storm.
Suckaside consists of BBP/Ghetto Funk superstar B-Side who has teamed up with long time funky DJ Sucka Timmywho specialize in DJ friendly funky edits and original productions. Together their styles blend into a rather Toxic cocktail of the funky street beats of DJ B-Side and the trained ear and skill for blending music from Sucka Timmy.

Toxic Funk Vol. 7 gives us a perfect example of what the Suckaside crew is all about with 2 state-of-the-art toxic funk bangers on this double A-sided instant classic funky 7 inch.
Stating off with the street funky Put Your Catz Up joint that can guarantee to rock just about any block party to its core. That is being followed up with the even funkier and smooth Hot Jumpin' on the flipside taking on some classic hip hop royalty - wrapped into a smooth funky arrangement.

This is only the beginning of what to expect from this production team and we're excited to be the first to release their funky jams on vinyls. Look out for more music coming soon from the team Suckaside.