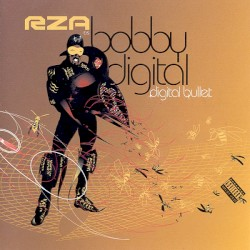 Double LP - Indies Exclusive: these are limited to 1 per customer

This is an exclusive release for Black Friday 2021. Available in-store from 26th November. Any remaining stock will be available online from Saturday 27th November at 8:00am. Strictly one per customer.

"RZA’s “Digital Bullet” Available On LP For The First Time Since The Mid-2000s In a colored vinyl pressing exclusive To RSD Black Friday. 5000 pressed worldwide. First released in 2001 on CD and LP. Vinyl out of print since mid-2000s. In the late 90s, Wu-Tang Clan superstar RZA developed a new persona. Based on his birth name and the fact that he was branching out into more digital production, Bobby Diggs became Bobby Digital. As RZA himself put it, “My birth name is Bobby Diggs. So at the time, creatively, I felt like I was in a digital frame…As Bobby Digital, I could use a character to describe some of the earlier days of my own life. Partying, bullshitting, going crazy, chasing women, taking drugs. It was a mixture of fiction and reality together to make a character I thought would be entertaining. RZA released “Bobby Digital In Stereo” in 1998 and it was certified Gold in a matter of months. Its follow-up “Digital Bullet” dropped in August of 2001 continuing the conceptual story arch from “…In Stereo” but with Bobby Digital growing more enlightened and becoming disillusioned with the hedonism that previously served as his fuel. Audiences reacted by driving the release up to number 24 on the Top 200 and a Top 10 position on the R&B/Hip Hop Albums chart. Tracks: A Side 1. Show U Love 2. Can't Loose (feat. Beretta 9) 3. Glocko Pop (feat Wu-Tang Clan) 4. Must Be Bobby 5. Brooklyn Babies (feat. Masta Killa). B Side 1. Domestic Violence Pt.2 (feat. Big.Gipp) 2. Do U (feat. GZA & Prodigal Sunn) 3. Fools (feat. Killa Sin) 4. La Rhumba (feat. Beretta 9, Killa Sin & Method Man) 5. Black Widow Pt.2 (feat. Ol' Dirty Bastard). C Side 1. Shady (feat. Intrigue) 2. Break Bread (feat. Jamie Sommers) 3. Bong Bong (feat. Beretta 9 & Madam Scheez) 4. Throw Your Flag Up (feat. Black Knights). D Side 1. Be A Man 2. Righteous Way (feat. Junior Reid) 3. Build Strong (feat. Tekitha) 4. Sickness