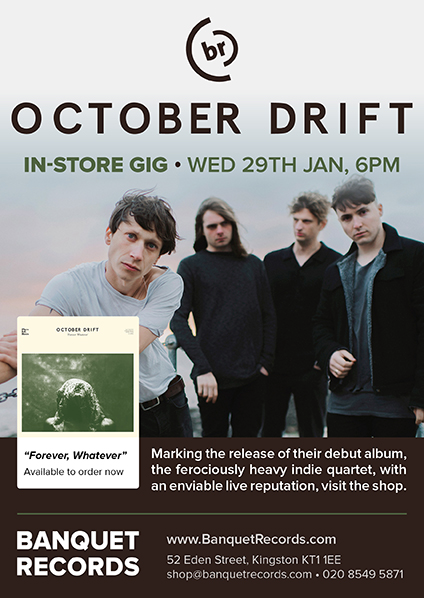 Celebrating the release of their debut album titled Forever Whatever, the heavy-indie quartet October Drift play in the shop.

An immersive wall of distortion envelopes the powerful fragility of frontman Kiran Roy’s vocals, while he paints a verbal landscape of introspection, despair and hope amid a sonic palette that evokes both the driving, spacious absorptivity of My Bloody Valentine and the poetic, visceral honesty of Nick Cave’s lyricism. “It’s a song about trying to keep your head above the water,” says Kiran. “It was written at a time when everyone around me seemed to be moving on with their lives and I was stuck in the same place. Its basically about the fears of getting older and underachieving, but trying not to let it get to you and even staying optimistic in spite of those fears” ‘Losing My Touch’ follows the band’s previous singles ‘All Broken Down’ and ‘Come And Find Me’, released to widespread acclaim last year. With influences as varied as The National, Radiohead, Interpol and Nick Drake, their heavy, pop inflected rock is delivering a rejuvenating injection of fresh blood to the genre. October Drift’s debut album, details of which will be revealed soon, is a cathartic collection of tracks encompassing themes of loneliness, fear and ultimate positivity, and builds on the solid foundation that they have built over years of touring and writing to cement themselves as an important and powerful new presence. Physical Education’s Justin Lockey says of their signing; “October Drift are one of those bands... there's maybe a handful at best in every generation of guitar bands.

Priority will be given to anyone who orders a copy of Forever Whatever from us.

Albums will be posted unless you select 'Collect In Shop' when checking out, tickets are for collection from the shop on the day of the in-store, please bring your order number with you. 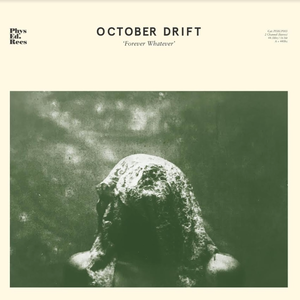 Georgia Tuesday 14th January at The Fighting Cocks, 18+   Past Event