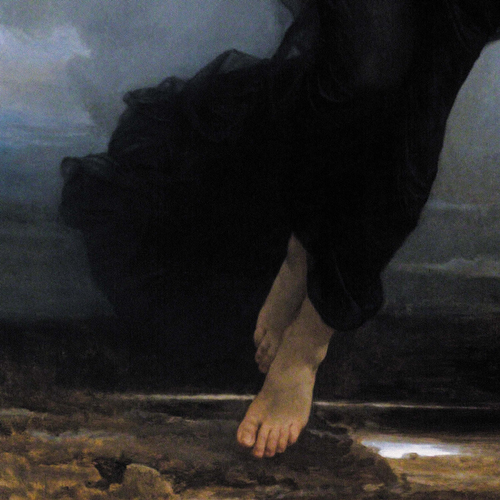 “I’d work on it when everyone else at home was in bed,” says Aidan Moffat of his latest musical project as Nyx Nótt. “I don't sleep very well and I'm very much a nighthawk, so the music I made was naturally nocturnal.”

The essence of night and Moffat’s moonlit tinkerings became such a prominent role in the creative process that his new alias had to reflect this too. “I originally planned to release the album anonymously and tried to think of a convincing, exotic name that suited the nocturnal themes of the album. Nyx and Nótt are two mythical goddesses of night, Nyx from the Greek and Nótt from old Norse.” The album title translates as "At the Feet of Night", so this is an album not simply of, or from, the night, but an ode to it - a sonic worshipping of the night’s pull and allure. Crepuscular music.

The result is an album that pulses like the quiet hum of night; the production is clear and crisp with every movement, note and sound augmented with stark clarity - like the amplified sound of a creaking floorboard as you move through the house in darkness. It’s a deeply percussive album, resulting in gentle rhythms that often give way to moments of real stillness and tenderness that stem from the rich orchestration and composition - one that glides from strings to brass to quietly purring electronics. The album moves through jazz, ambient and electronic to result in something that sounds like it might be a score to Moffat’s dreams. “It’s made with samples, sound effects, keyboards, and the occasional toy,” says Moffat. “All but one of the tracks started with drums – I'd been collecting jazz drum samples and sessions for a while and I would layer a few kits on top of each other to create rhythms, then add music and samples from there.”