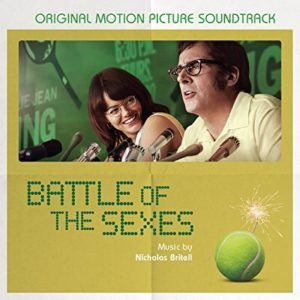 Battle Of The Sexes - OST

In the wake of the sexual revolution and the rise of the women’s movement, the 1973 tennis match between women’s World #1 Billie Jean King (Emma Stone) and ex-men’s-champ and serial hustler Bobby Riggs (Steve Carell) was billed as Battle Of The Sexes and became one of the most watched televised sports events of all time, reaching 90 million viewers around the world.

As the rivalry between King and Riggs kicked into high gear, off-court each was fighting more personal and complex battles. The fiercely private King was not only championing for equality, but also struggling to come to terms with her own sexuality, as her friendship with Marilyn Barnett (Andrea Riseborough) developed. Meanwhile Riggs, one of the first self-made media-age celebrities, wrestled with his gambling demons, at the expense of his family and wife Priscilla (Elisabeth Shue). Together, Billie and Bobby served up a cultural spectacle that resonated far beyond the tennis court, sparking discussions in bedrooms and boardrooms that continue to reverberate today.

Battle Of The Sexes premiered in September 2017 and received positive reviews from critics, who praised the performances of Stone and Carell, with some calling it the best performance of Stone’s career.

The score is composed by Nicholas Britell. He was nominated for the Academy Award for Best Original Score and Golden Globe Award for Best Original Score for the film Moonlight in 2016. The soundtrack features original songs as well; “Rocket Man” by Elton John, “What Is Life” by George Harrison, “Crimson and Cover” by Tommy James & The Shondells and “If I Dare” by Sara Bareilles.

LP 1 of Battle Of The Sexes is pressed on blue vinyl and LP 2 on pink vinyl. This limited edition of 500 individually numbered copies contains a 4-page booklet with exclusive pictures and liner notes.