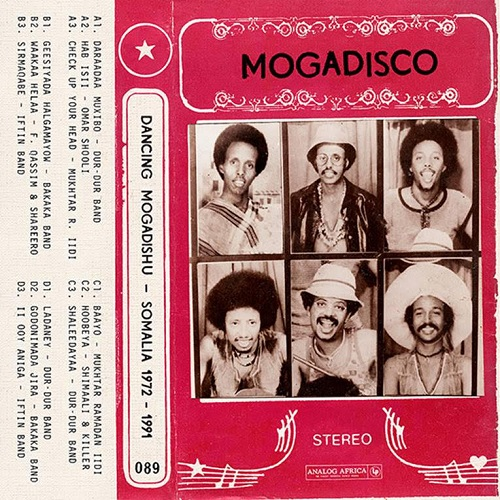 After being blown away by a few tunes - probably just as you will be after listening to this - Samy Ben Redjeb travelled to the infamous capital city of Somalia in November of 2016, making Analog Africa the first music label to set foot in Mogadishu.

Mogadisco was not Analog Africa’s easiest project. Tracking down the musicians - often in exile in the diaspora - to interview them and gather anecdotes of golden-era Mogadishu has been an undertaking that took three years. Tales of Dur-Dur Band’s kidnapping, movie soundtracks recorded in the basements of hotels, musicians getting electrocuted on stage, others jumping from one band to another under dramatic circumstances, and soul singers competing against each other, are all stories included in the massive booklet that accompanies the compilation - adorned with no less than 50 pictures from the ‘70s and ‘80s. As Colonel Abshir Hashi Ali, chief don at the Radio Mogadishu archive - someone who once wrestled a bomber wielding an unpinned hand-grenade to the floor - put it: ‘I have dedicated my life to this place. I’m doing this so it can get to the next generation; so that the culture, the heritage and the songs of Somalia don’t disappear.’