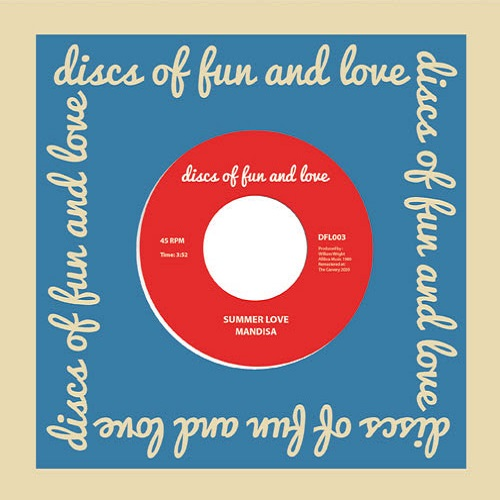 London reissue label Discs of Fun and Love are back after the overwhelming success of their previous two releases and are excited to announce DFL003. A reissue of Mandisa’s “Summer Love”.

Originally recorded in 1980 at Omega Studios in Chicago, Mandisa’s “Summer Love” is another deep crossover glider with the deep and obscure jazzy floater “Love’s Dream” on the flip side. Both sides of the original 7 were versions of tracks taken from Prince Billy Madhi Wright’s album “You Got Dat Wright” and added Maggie “Mandisa” Epting on vocals. The players on the original 7inch session were Billy Madhi (William Wright) on Saxaphone, The Plaxico brothers on Bass and Drums, Bruce Jones on Keyboards and Gensia Williams on backing vocals

The record has been almost impossible to find in the last few years so we are incredibly pleased to release a fully licenced and remastered issue to the world.

Fully licenced from William Wright (Allibra Music) and Maggie Epting and remastered by Grammy nominated mastering house the Carvery. This elusive record is ready to set fire to dancefloors across the globe.

Discs of Fun and Love is a reissue label run by DJs and diggers Miche, Spiritland’s programmer and Frederika, a resident at Spiritland. It’s also a party, due to run regularly on some of London’s top soundsystems, focusing on modern soul, boogie, jazz funk and more.