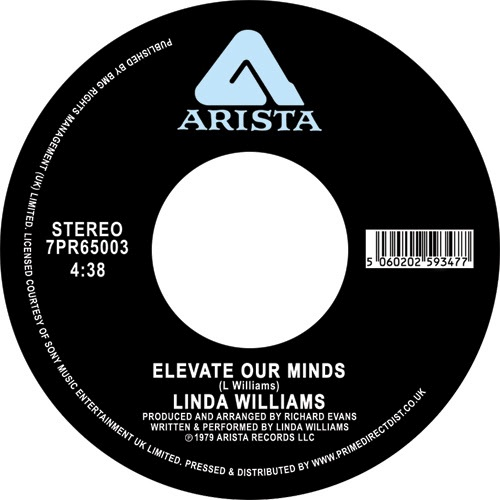 1979 Linda Williams gold from the Arista archives gets a much welcomed official, remastered reissue.

With an intro that does exactly as its title suggests, ‘Elevate Our Minds’became a huge rare groove record in the mid to late ‘80s. Produced by the late, great Richard Evans who worked with the very best in the business, from Gene Chandler and Marlena Shaw, to Ramsey Lewis and Ahmad Jamal, it’s supremely arranged, blending a Bossa Nova beat and trumpet trills with Linda’s distinctly New York authenticity that comes through in the vocals. Like a trip to the blissful beaches of Riowhilst bringing a touch of the New York disco glam along for the ride. Exotic yet familiar, all in the same breath.

On the flip, ‘City Living’, a straight upNew York disco killer - oozing with funk, dripping in brass blasts, off beat hats and spruced up synths,it’s a primetime ode to the hustle and bustle of the city. Williams’ glorious tones, assisted by a majestic troupe of backing singers, glisten alongside the classy drumming and polished bass badness that lays behind it.

The Sisters Love Give Me Your Love / Try It, You'll Like It Soul Brother Records