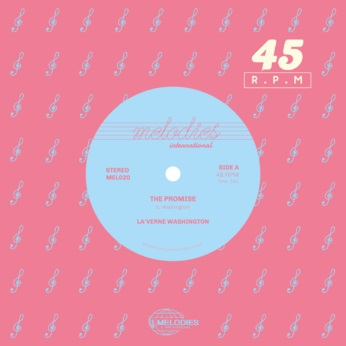 The Promise / Thats What I've Been Searching For

We're glad to be back with our latest reissue, a couple undercover soul gems from the Midwest originally self-released in 1984: LaVerne Washington’s “The Promise” and “I Found What I’ve Been Searching For”.

LaVerne has dedicated her life to the arts in every possible way. As an artist herself but also behind the scenes, helping and supporting her contemporaries fulfil their callings. Charlie Parker, Count Basie, Ella Fitzgerald, Mary Lou Williams - LaVerne grew up in Kansas City listening to the all time jazz greats, and soon discovered she was blessed with a keen sense for playing music by ear, playing the piano to what she would hear on the radio. In her teens whilst the 60s transitioned to the 70s’ disco and funk era, LaVerne was there to witness it all, and she would go on to study music at the Charlie Parker Academy where she was inspired to become an entertainer.

At Langston University, LaVerne kept studying music where her career blossomed, founding and touring the US with the gospel group “Emery Shaw and the Voices of Praise”, singing in several college bands and with her choir “The Voices Of Bethel”. LaVerne would go on to perform notably with her bands “LaVerne Washington and Rococo” and the “LaVerne Washington Quartet”, and record several songs in KC including “The Promise” and “I Found What I’ve Been Searching For” in 1984 before moving to Washington DC.

In DC, LaVerne was offered a position as a Program specialist with the National Endowment For The Arts where she started supporting other artists through her work. Over the next couple decades, LaVerne became an associate producer for the Rhythm and Blues Foundation and the Pioneer Awards Ceremonies held in New York, Philadelphia and Los Angeles, which saw the likes of Prince, Aretha Franklin and Jerry Butler attending among others. She has also managed and was mentored by DeeDee Sharp and consulted with artists including Bonnie Raitt (who acted as a mentor to Laverne as well), Kim Weston, Kathy Sledge (SisterSledge), Smokey Robinson and G.C Cameron (Spinners). During that time, LaVerne has kept singing, on her own and as a backing vocalist for DeeDee Sharp and Freda Payne and has never stopped her lifelong dedication to music and the Arts.

The Promise original 7” was LaVerne’s last recording in Kansas City before her move to DC and the beginning of her involvement behind the scenes. Channelling her gospel roots - with impeccable arrangement, a contagious drum machine led rhythm section, soaring vocals and relatable lyrics, “The Promise” is guaranteed to bring back smiles to dancefloors and living rooms alike! “I Found What I’ve Been Searching For” on the flip is a beautiful soul ballad which really showcases the strength and emotion in LaVerne’s voice.

Back again in it’s original 7” format and digitally for the first time, we’ve had the audio transferred and restored from the original 24 track tape provided by LaVerne, and got the recordings re-mixed for the best possible sound! Floating Points behind the mixing desk for this new iteration of a lost classic, comes with a 14”x14” poster of the original picture sleeve.

LAVERNE WASHINGTON The Promise / Thats What I've Been Searching For