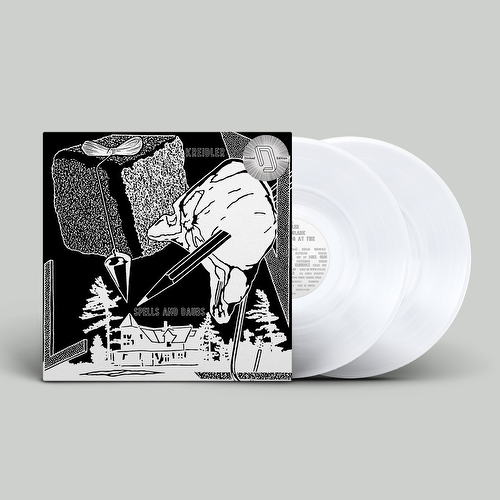 LP + 12" white Dinked Edition: these are limited to 1 per customer

"Dinked Edition" is on 'white' coloured vinyl, includes an exclusive bonus 3-track 12" and alternative artwork. /400. For avoidance of doubt, the centre is a standard spindle size, and not dinked.

In September 2020 the band met for exploratory sessions and initial recordings in Düsseldorf, in the familiar settings ofthe Kabawil Theater. That already has a certain tradition. The impetus this time was a solitary gig in the conspicuously spacious surroundings of the (former) Philipshalle. In a year that threw everyone back on themselves.Over the winter Kreidler worked remotely, sifting through the material, arranging the pieces, adding textures and contours. They met again in the spring of 2021 for further recordings at the Uhrwerk Orange studio in Hilden, near Düsseldorf. That, too, has a certain tradition.

From fifteen pieces they filtered out ten, and thus held an album in their hands. Then – and this is new – they took it to London, to Peter Walsh, so that he could mix the tracks.

Daubs are in no doubt here. This is a tenfold of colourful-blotches-thrown-onto-canvas. Then a stepping back, contemplating,remixing paint, layering, overlaying, scraping free again elsewhere. And these spells are not devastating curses, rather they are enchanting incantations, a calling forth a spring without having to ban winter in a somber masks. SPELLS AND DAUBS is a melodious interplay. Not that Kreidler neglect the rhythmic; their characteristic drive runs through all the pieces on SPELLS AND DAUBS. Perhaps it's like this: The beat is musicalised, the melody rhythmitised.