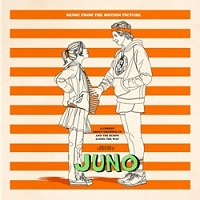 Another film with a rad soundtrack!

Music plays a key part in Juno, the way-too-charming indie comedy directed by Jason Reitman and written by Diablo Cody. Juno, the pregnant teen of the title role, isn't just a kid who loves rock & roll; she and her boyfriend Paulie Bleeker play guitars together, the adoptive father of Juno's kid is a recovering grunge rocker who toured the world and elsewhere in 1993, and Reitman punctuates the film with songs, both classic rock and precious twee folk tunes from Kimya Dawson, formerly of the Moldy Peaches. Some might say that the sickly sweet songs of Dawson don't fit comfortably alongside The Kinks, Mott the Hoople, Cat Power, Belle and Sebastian and Sonic Youth's cover of the Carpenters' "Superstar," but a large part of the appeal of Juno is how the world-weary sarcasm of Gen-X rubs against the unapologetic quirkiness of Gen-Y, and the soundtrack reflects that almost more than the movie, as the Dawson songs are even more prominent on this 19-track album than within the 90-minute movie. This may not be to everybody's taste -- many found the twee tunes irritating, not charming -- but anybody who loved the movie completely will find the Juno soundtrack just as witty and warm as the film itself.

All I Want Is You