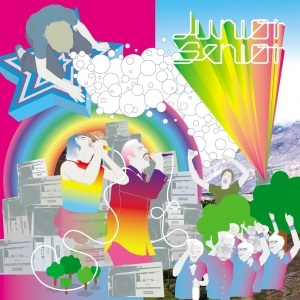 The beat that D-D-Didn't Stop! 20th anniversary re-issue:2022 marks the 20th anniversary of the seminal debut-LP from Danish band Junior Senior. In 2002 they came out of (seemingly) nowhere with the global hit single "Move Your Feet" that took the world by storm and merged credible retro influences such as 60s Motown pop, the rough edges of garage rock'n'roll with 90s hiphop and early lo-fi sample-based dance music. The album dropped just around the time where Daft Punk and the White Stripes made a huge impact on airwaves and dance floors in each their ways. Junior Senior was an odd and unique band that had its own take on raw, high octave and highly addictive pop music for a new age. Even the artwork looked decidedly odd and just... new! Junior Senior toured the world on the back of D-D-Don't Don't Stop The Beat (2002) and the follow-up - and strangely overlooked - album Hey Hey My My Yo Yo (2005) and eventually broke up shortly after the swan song EP Say Hello, Wave Goodbye (2007). And even though the physical vinyl album sold out almost instantly and all CDs have also vanished from the record shops, the band's music - and especially "Move Your Feet" - has continued to gain fans and momentum on the digital download and streaming platforms. The number monthly listeners keep rising for music that is by now 20 years old. As a bona fide evergreen the Junior Senior beat h-h-hasn't stopped - and it looks like it never will. And now... The original home label of Junior Senior, Crunchy Frog, is FINALLY re-issuing the vinyl LP. With the original track list, original mastering and original artwork. As Junior and Senior intended it. Get it while it's hot!