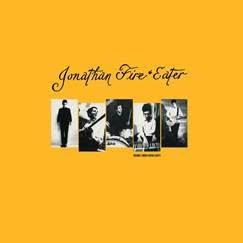 n a world chock full of ?ame-outs, coulda-been contenders and great white hopes, the band Jonathan Fire*Eater are among the “almost-est.” Widely praised as the mid-Nineties next-big-thing, they are largely credited with being the earliest purveyors of the “New York City Rock and Roll Revival” circa 2001. Which would be great, if only the band hadn’t imploded by 1998. The quintet employed a fresh, one-of-a-kind blend of sly rock and roll reference and reverence. Their press release at the time name-dropped all the correct and relevant in?uences...the Stooges, the Modern Lovers, Tom Waits, the Scientists, ? and the Mysterians, the Cramps, Nation of Ulysses, the Stones, Nick Cave and the Bad Seeds...all markers conveying the point that Fire-Eater’s dark, brooding overtones are complemented by springy Far?sa tones and impressionistic, evocative lyrics. The band was inarguably in top form with the 1996 EP release of Tremble Under Boom Lights. Mean and lean at only ?ve tracks, those songs click together perfectly, enough so to kick-start a major label bidding frenzy which found the band signing a lucrative, seven-?gure contract. Showcasing lead singer Stewart Lupton’s redolent exercises in picturesque poetry, coupled with Matt Barrick’s inimitable percussive attack, Paul Maroon’s wide, unadorned guitar blistering throughout while Walter Martin’s choice, deliberate organ accompaniment and Tom Frank’s propulsive, bottom-heavy bass all join together for a full, beautiful, glorious masterpiece. Lead-off track “The Search For Cherry Red” would not only provide the EP with a title via its lyrics, but would also see a second life as covered by esteemed rock-and-rollers The Kills. “Give Me Daughters” is enviable for the perspective it foresees, when taking into consideration its narrator was barely 21 years old at the time. Songs ? it about cock?ghts, open caskets, ballroom gowns, switchblades, motorcycle accidents and jewel thieves all to propel the record into a world of juvenile delinquent attitude and vivid cinematic color. For the Japanese release of Tremble Under Boom Lights, the ?ve-song running order was accentuated with four bonus tracks...three songs from the band’s 1995 debut single and a spritely cover of the Lee Hazelwood gem “The City Never Sleeps.”  With the 2019 reissue, Third Man Records is proud to make these seminal songs available digitally and on vinyl for the ?rst time in over two decades. All parties involved are beyond overjoyed to augment the running order of the Japanese version of Tremble Under Boom Lights to include the bonus track “In the Head.” Touted by the band members as the last song they ever recorded, it is wincingly brilliant, the most artful, dudes-in-their-early-twenties version of a swan song that one may ever hear. After the break-up, Barrick, Maroon and Martin would go on to form the backbone of the Walkmen and enjoy a solid run with their seven full-length releases. All three are still active in the music business today. Frank went on to a career in journalism, writing for Vanity Fair and acting as contributing editor for Washington Monthly. Despite struggling with addiction for years, Stewart Lupton notched solid efforts with his bands the Child Ballads and the Beatings. Lupton passed away suddenly on May 27th, 2018 at the age of 43.