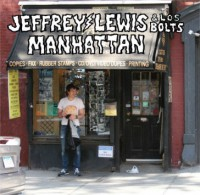 New York's anti-folker Jeffrey Lewis is back with a new album and backing band Los Bolts (made up of Lewis regulars) and includes his own comic style illustrations throughout!

The album is both named after and directly inspired by New York City, but is no regionalised curio. It’s the very specificity of the details Lewis uses to depict his characters and situations that make his songs so evocative, and so emotionally rich. Lewis is both a lifelong resident and a detached observer of his hometown; but ultimately, it’s a simple treatment of human moments by one of our sharpest songwriting talents.

Villagers Where Have You Been All My Life? Domino
Jeffrey Lewis & Los Bolts Manhattan