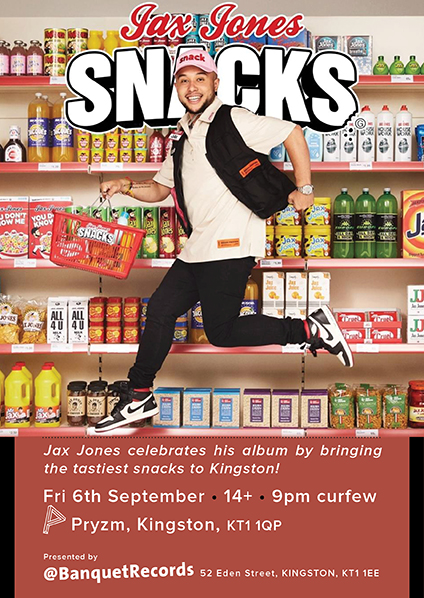 On the day that his hugely anticipated debut full length is released, Jax Jones visits Kingston to put on a super special, one-off event at Pryzm.

This is going to be bonkers. It's a live show with guests who appear on his album, bringing in extra visuals, quite an amazing Jax Jones pop-up shop, more extras we can't yet reveal, and a t-shirt giveaway. This is not one to miss.

Jax's live show is recognised worldwide as the best in Dance music, the event will be sound tracked by his tastiest snacks including ‘You Don’t Know Me’, ‘Breathe’, ‘All Day And Night’ and current smash ‘Harder’, all seasoned with his secret recipe of inflatables, insane live visuals, CO2 canisters and more!

The release of Snacks cements Jax’s status as one of the industry’s most prominent forces with a succession of his seven huge singles. From the Grammy, BRIT Award nominated and double-platinum ‘You Don’t Know Me’ featuring Raye. To the most Shazamed track in the dance world, the BRIT Award and Ivor Novello nominated ‘Breathe' featuring Ina Wroldsen as well as further smash singles such as 'Instruction' with Demi Lovato & Stefflon Don, ‘Ring Ring’ with Mabel and Rich The Kid, ‘Play’ with Years & Years, 'All Day And Night' with Martin Solveig and Madison Beer, ‘One Touch’ with Jess Glynne as well as his recent release ‘Harder’ with Bebe Rexha, Snacks is the perfect party album for the playlist generation.

Since bursting on the scene in 2016 with ‘House Work’, Jax Jones has proved himself to be a genre-defying artist producing and releasing music that spans across pop, house and urban. Drawing on a diverse number of musical influences as well as working with a myriad of musicians, in true Jax Jones style every track on Snacks is distinct both sonically and lyrically yet infuses his signature beats and style.

Snacks embodies the household theme Jax has become synonymous with previous singles being tied to the theme, leading up to the bold visual aesthetic and title of the album.

CD/ticket is £16 post-paid, and other formats and combos are available.

Jax Jones I miss u Polydor 12" 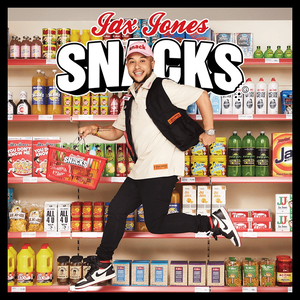