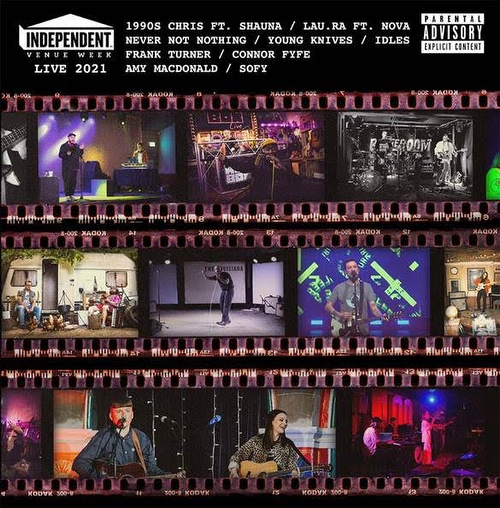 Independent Venue Week (IVW) release their fourth live album with recordings taken from shows across IVW21, plus tracks recorded at others shows in 2021.

The release includes tracks from some of the most exciting artists who played this year. The single gate-fold record features eleven artists across five different venues and is part of the venture's 8th edition. The release features such artists as IVW 2021 Scottish Ambassador Amy Macdonald, IDLES, Young Knives, Frank Turner, Connor Fyfe, SOFY, Never Not Nothing, 1990s Chris ft. Shauna, lau.ra ft. NOVA

Due out on Friday 3rd December 2021, the album will be released in anticipation of Independent Venue Week 2022 (Monday 31st January - Sunday 6th February)

"I was so honoured to be asked to represent independent venues in Scotland for IVW 2021, without small venues I wouldn't be doing what I'm doing now, I'm forever thankful for the opportunity they gave me! Oran Mor is such a beautiful venue in my hometown, so it was great to get the guys together and do a few songs there, even if we couldn't get an audience in." Amy Macdonald – IVW Scottish Ambassador 2021

"Independent Venue Week this year gave us absolute focus for a week in the midst of a pandemic. We had the opportunity to put on 7 shows which reached our regular customers and a worldwide audience. Around 80,000 people watched the shows. It allows us to raise the profile of our venue and share big musical artists to our regulars and an entirely new audience. Grassroots venues are incredibly important for emerging artists. IVW puts a spotlight on these venues by bringing more established artists in for shows. It builds excitement at venues and draws customers back to live music after the festive period. The coming year will be the most crucial yet ensuring venues get the much needed boost after 19 months of closed doors. As a venue we are honoured to be a part of the annual campaign and relish the chance to welcome new and returning customers to the venue." Denholm Ellis - Hot Box Live Events, Chelmsford