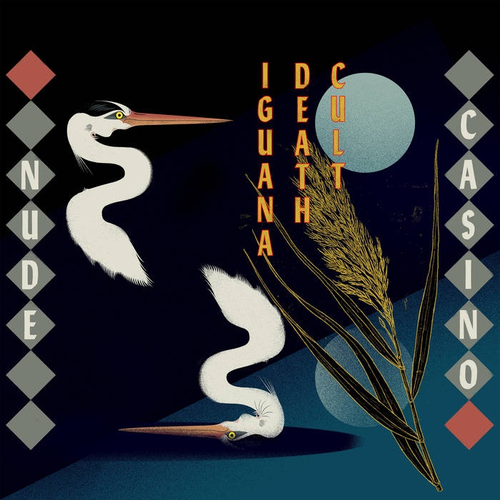 Rotterdam’s Iguana Death Cult hasn’t exactly been shy about causing havoc on whatever stage they set foot. That’s likely been the one constant since establishing their giddy brand of protopunk and garage rock on debut LP The First Stirrings Of Insect Life. Iguana’s pending follow-up Nude Casino marks a swift and sobering departure from the miasma of psychedelics they purvey so fervently. But no less intense: this band has been sharpening their tools, reemerging from their concrete cavern with a ragged and convulsive post-punk attack akin to Devo, The Gun Club, and Richard Hell.

Nude Casino sporadically evokes Iguana Death Cult’s more hedonistic tendencies, but the album’s crisper, more unvarnished sonic makeup illustrates a seething skepticism as a counterbalance. Frontman Jeroen Reek finds himself teetering in demented neurosis between vivid dream states and stark reality. The album’s beating heart is ‘Tuesday’s Lament’, an arresting five-chapter monologue that wrestles with the strains of mortality and belief. As Reek narrates the invasion of existing evils into his phantasmagorical, aquatic dream world, somehow, Iguana Death Cult manage to jam it all into a belter of a melodic hook: “Swimming upstream for the sake of paradise, it’s up there still.” A bashful resolution, albeit one that balances on the edge of fatalism.