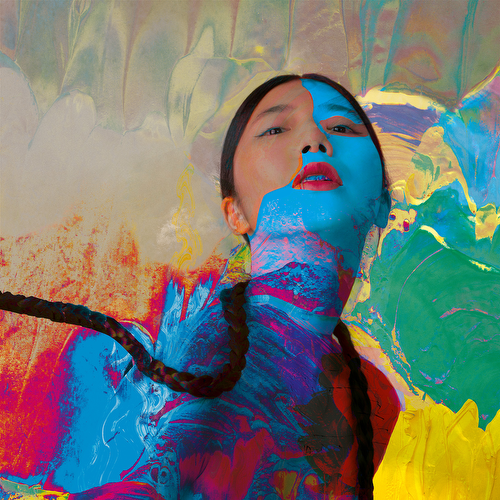 LP + Art Print turquoise Dinked Edition: these are limited to 1 per customer

"Dinked Edition" is on 'turquoise' coloured vinyl. Includes an exclusive art print. Signed & numbered /300. For avoidance of doubt, the centre is a standard spindle size, and not dinked.

There isn’t a more unique entry into a musical journey than that of Japanese voice artist Hatis Noit, who today announces her much anticipated debut album Aura will be released June 24 on Erased Tapes.

Her musical awakening took place at the tender age of sixteen during a trek to Buddha's birthplace in Nepal. One morning when staying at a women’s temple she came across a female monk singing Buddhist chants whose otherworldly sounds moved her so intensely that she was instantly aware of the visceral power of the human voice; a primal and instinctive instrument that connects us to the very essence of humanity, nature and our universe. From that moment she knew singing was her calling.

The album title Aura was inspired by the German philosopher Walter Benjamin who used this term to describe the fundamental essence of art, which he believed is strongest in its original form, only happening once. Hatis agrees with this particular aspect as she realised, “during the pandemic, I really struggled. As a singer, I’m not very good at working on the computer. I much prefer doing live performances in physical spaces. Being with people, sharing the same space with them and feeling the atmosphere and energy of that moment, inspires me every time. To me art is that — that shared moment.”

The gravitas of the pandemic caused Noit to look inwards and reflect. This resulted in the album becoming a remedy for what was going on in the world and ultimately to remember the joys and richness of life. Hatis adds to this sentiment, “we cannot live forever, do everything or be everywhere. But that makes our lives unique and invaluable. I wanted to be focused on our limitations and show how precious life is.”