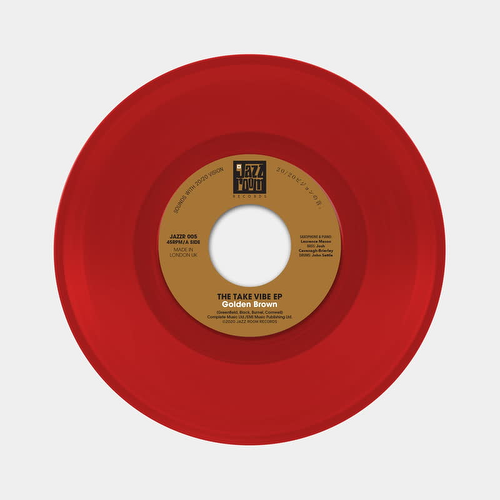 2020. Full On Lockdown: Musician LaurenceMasonputs together this off the wall idea meshing together two of his biggest musical heroes, Dave Greenfield of the tough 1970's proto-punk band The Stranglers with the oh so cool 1960's jazz of Dave Brubeck. He puts up his demo on Youtube not really expecting much in the way of feedback. And gets ONE MILLION hits. And hundreds of requests for a release. Jazz Room Records Head Honcho Paul Murphy says "Do you wanna record that and release it?"."Affirmative!" The result is this grooving Soulful and Funky Jazz version of "Golden Brown". We're rush releasing this as when announced we were swamped with requests asking when it will be available.

On the "B" side is a languid and super cool version of "Walking On The Moon", originally by 80's Supergroup The Police.

Each copy of the Take Vibe E.P. will contain a Cut Out and Keep Fully Customizable Front Cover Sticker Sheet

Jackie Wilson / Doris & Kelley Because Of You? / You Don't Have To Worry Deptford Northern Soul Club Records Pre-Order

Arab Strap The Turning Of Our Bones Rock Action Records