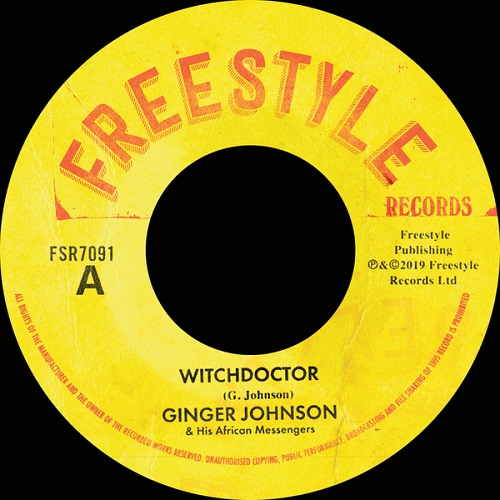 Ginger Johnson & and His African Messengers

7": these are limited to 1 per customer

In 2015, Freestyle Records re-issued the groundbreaking 'African Party' album by the somewhat mysterious figure of Ginger (George Folunsho) Johnson. Recorded in 1967, nearly 20 years after he first arrived in post war London and immediately began performing and recording with London jazz stalwarts Ronnie Scott and Pete King.
Credited by those in the know (including Giles Peterson, Louie Vega, Fela Kuti's drummer Tony Allen & writer David Toop) as the godfather of afrobeat, Ginger and his group, The African Messengers enjoyed a varied career as the go to afro-cuban percussion group for recording sessions in the UK, working with Georgie Fame, Osibisa, Madeleine Bell and Quincy Jones - as well as acting us mentor to a young Fela Kuti and members of Cymande who cut their teeth as members of his ensemble. They also performed at The Royal Variety Performance, Ginger's music featured in the James Bond film 'Live & Let Die' and Ginger himself appears on screen drumming in the Hammer Films cult classic 'She', and famously performed with The Rolling Stones in Hyde Park in 1969.
Aside from 'African Party', and several Hi Life singles released on the Melodisc label in the 50's, it was thought that there were no further recordings by this hugely influential musician . Eventually, prompted by the attention afforded the Freestyle re-issues - Ginger's son Dennis Dee Mac Johnson was contacted by Uchenna Ikonne, a renowned African music collector, who told him he had discovered one rather battered original copy of a 45 single, released in the mid 70's on the short lived 'Afrodesia' label,

For Record Store Day 2019, Freestyle are proud to release the 2 tracks on a fresh vinyl 45. 'Witchdoctor' is not the track of the same name on African Party, but it and 'Nawa' (written by Dizzy Gillespie cohort Chano Pozo) demonstrate a musical progression as funk had stamped it's indelible footprint on Ginger's music along with afro-cuban rhythms and jazz.
Thanks to Claudio Passavanti at Doctor Mix Studios in London, who has done quite an amazing restoration and re-mastering job on this long lost music.