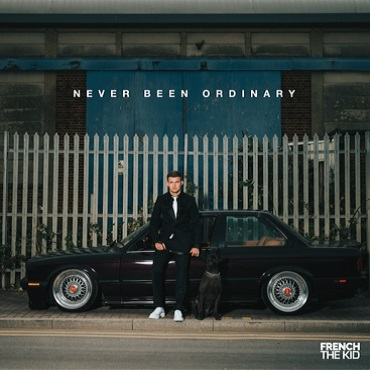 French The Kid releases his debut mixtape Never Been Ordinary via Drop Out UK. Laid over 13 tracks, this hard-hitting debut is an unapologetic statement of exactly who French The Kid is as an artist. Meeting his raw, evocative storytelling with beats from an eclectic range of emerging producers - the likes of Lovelife (‘Thrill’, ‘Can't Feel My Face’, ‘Make It Out’), Joey4k (‘Neverland’) and Tanz (‘Window Blues’) - Never Been Ordinary is a confident statement of intent from the most exciting rapper emerging in the UK.

From ardent piano-driven opener ‘Mercy’ to the melodic ‘Don’t Feel The Same’ the project sees the bilingual rapper seamlessly move between bars in French and English. With lyrics spanning mental health struggles, feelings of isolation, ruminations on drugs and drinking, to the harsh realities of life on London’s streets, it’s a project seeped in honesty and authenticity. Moving title track ‘Conversations/Never Been Ordinary’ sees French unleash an inner dialogue on his relationship with alcohol, with his fans and his mental health inspired by Eminem’s iconic ‘Stan’. Fiery, piano-driven new single ‘Make It Out’ speaks of the duality of his new found success and the tribulations of life on the strip.