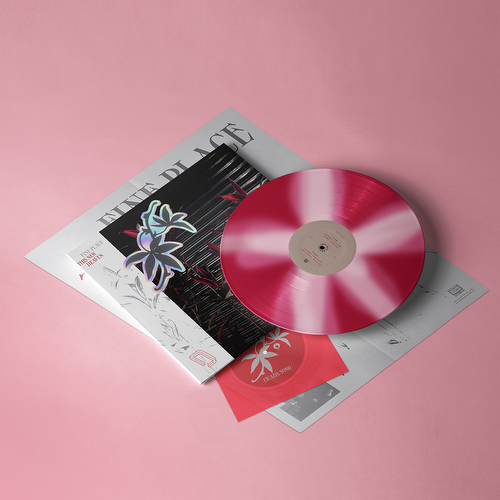 LP + flexi-disc red/white/cornetto Dinked Edition: these are limited to 1 per customer

"Dinked Edition" is on 'red / white / cornetto' coloured vinyl. Includes an excluvei Flexi-disc, A2 poster and Obi-Strip. /500. For avoidance of doubt, the centre is a standard spindle size, and not dinked.

Fine Place is a new duo comprising Frankie Rose (Vivian Girls, Crystal Stilts, Dum Dum Girls) and Matthew Hord (Running, Pop. 1280, Brandy). Based in Brooklyn, NYC together they’ve crafted a crystalline full length of nocturnal, electronic pop music that charts a way out the post-global, cyberpunk dystopian environment it was crafted in. Their debut album This New Heaven drenches minimalist song structures in post-industrial washes of sixstring delay and gothic post-punk synths. Presiding over it is the most evocative, emotive vocal performance Frankie Rose has committed to tape to date.

Following Hord’s relocation from Chicago, the pair wanted to explore new avenues apart from their respective bands or solo projects. “The sound we were going for was an attempt to capture the dystopian feel of New York during a period of desertion by the wealthy. It was produced in a time-frame saturated in both uncertainty and serenity, and the soundscapes we created felt fitting and almost organic as a response to our surroundings. The title also reflects this in an arguably literal, maybe even satirical way.” Sonically, Fine Place references the pioneering mid-to-late 80s pioneers of icy melodrama The Cure and Cocteau Twins, while reflecting both the individuals’; music trajectories thus far. Modular synthesis triggers rhythm boxes and fluttery arps chirp around clanging 808-patterning as Rose’s reverb-laden vocal layering envelops the remaining headroom. The result is massive; a towering, shadowy music that embraces darkness while offering Rose’s bright vocal as chinks of light in the cracks; the production filling the head space of the beholder with preternatural imagery and emotional resonances that are real but not quite defined.

The title song propels forth out of the fog, scintillating with delayed guitar before the reverb-immersed vocal injects the human drama. The chorus constantly teases a big release but holds back creating a taut, dynamic tension. Cover Blind’s slow march makes full use of Rose’s layered vocal sinking and emerging from Hord’s bank of synths. Stand out It’s Your House is pure honey pouring from the speaker on a bank of of arps and near-hymnal vocal layering, a syrupy light offering in the mist. It’s an emotive highlight that only increases as the album progresses; Impressions Of Me is the Lynchian ballad that glides onward into the sunset. The album finishes on a choice re-interpretation of the 1989 track The Party Is Over by Belgian group Adult Fantasies, one of the great over-looked ballads of the era given an almost ecclesiastical makeover by Matthew Hord and Frankie Rose in 2021.

Says Hord: “This record was an incredibly challenging endeavor to make, as I had just come home from a European tour with another music project and wanted to invest into and focus on this collaboration with Frankie. I essentially reimagined how to approach writing basic sequences with the synthesizers I had been rehearsing and performing with for months prior to make something more accessible and pop- like for Frankie to build upon. Frankie is an unsung hero when it comes to mixing, and she was constantly mixing down and processing elements of the tracks to create different atmospheres as we forged forward with every song.”

This New Heaven is an ecstasy of sorts, a half-dream in the border between sleep and daylight.