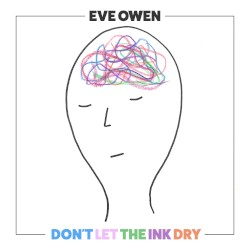 The debut album from British singer / songwriter Eve Owen, Don’t Let the Ink Dry, is a work of raw sensitivity and uncontained imagination, brought to life over the course of three transformative years. During that time, the 20-year-old artist spent her summer holidays writing and recording in New York with The National’s Aaron Dessner, immersing herself in a creative exploration that provided welcome refuge from her sometimes-troubled school life. As she discovered an entirely new sense of freedom and belonging, Owen devised a sonic language all her own: frenetic yet delicate, mercurial yet nuanced enough to capture the most ephemeral of feelings. Produced by Dessner at Long Pond Studio (a converted old farmhouse deep in the Hudson Valley), Don’t Let the Ink Dry finds Owen embracing her affinity for folk music while pursuing the endless possibilities in electronic experimentation.