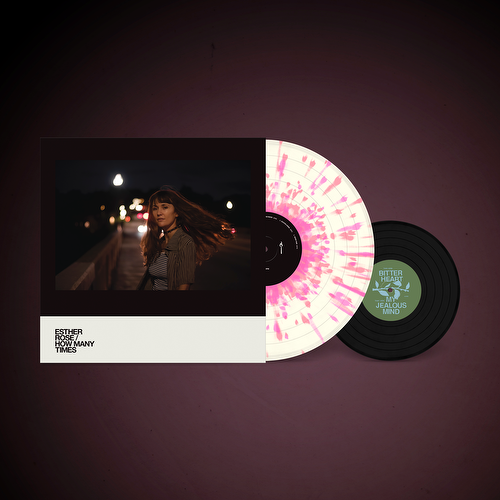 "Dinked Edition" is on 'pink / white / splatter' coloured vinyl. Includes an exclusive bonus 7". Packaged in a hand-numbered sleeve /350. For avoidance of doubt, the centre is a standard spindle size, and not dinked.

Esther Rose was in perpetual motion when she wrote How Many Times. In the span of  two years, she moved three times, navigated the end of a relationship, and began  touring more than ever. The New Orleans-based singer-songwriter used that  momentum while she penned her third studio album. That’s why, as the album title’s  nod to the cyclical nature of life implies, there’s a rush that accompanies How Many  Times as if you’re experiencing an awakening, too.

“That’s how I untangle what’s on my mind, by going off for a walk into wild places. That’s what makes this album a country album,” says Rose. “It’s not really just about feeling  better, it’s about feeling it, whatever it is.”

If Rose used time to frame the stories on her 2019 sophomore album You Made It This  Far, then she’s swapped that clock for a heart monitor on How Many Times. While some  may look outward and lament over hard times and bad luck, Rose turns inward. Instead  of blaming an ex for failing to juggle her reactions on “My Bad Mood,” she examines her  own blind spots where she hopes to improve as a partner. When her car’s engine blew  up during an impulsive “pitstop” in Nashville, she wrote “Good Time” not to rue  misfortune, but to toast her own recklessness. After losing her nerve and fleeing a New  Year’s Eve date by bicycle half an hour before midnight, she immediately penned “Are  You Out There,” confronting her fear of letting go and moving on.