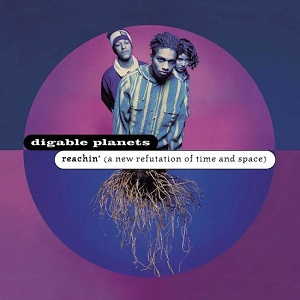 At a time when hip-hop was determined to snap your neck, a young, hip trio from Brooklyn (by way of Seattle, Philly, and Brazil) conspired on an uncommonly smooth new sound and freaky way of speak, a titanically chill expression of Black bohemia loaded with jazz idiom and a subversive Marxist bent—and pushed it worldwide via an undeniable crossover hit.

Digable Planets’ 1993 debut, Reachin’ (A New Refutation of Time and Space), unexpected to all involved, produced a massive radio hit in “Rebirth Of Slick (Cool Like Dat)”, which won the 1994 Grammy for Best Rap Performance by Duo or Group.