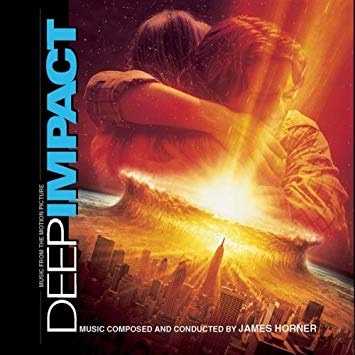 In the middle of the period where James Horner released successful soundtracks like Titanic and The Mask of Zorro another subtle and effective composition appeared, his soundtrack to the movie Deep Impact. The disaster movie which focuses on an asteroid hurtling towards earth grossed over $349 million worldwide. It's a multi-faceted piece, bringing the empathy with the characters to the viewers. The thematic part of this music is strong and the beauty lies in the unexpected when the giant comet is coming closer to earth. An instant classic and one of the best pieces Horner recorded.

Deep Impact was released in the same year as the other disaster movie Armageddon. Both focusing on humanity's fear of being hit by a giant rock or comet from space. While Armageddon was hitting the jackpot at the box office, Deep Impact can be seen as being the most scientifically accurate. Deep Impact stars Robert Duvall, Téa Leoni, Elijah Wood and Morgan Freeman, and was directed by Mimi Leder.

Jumanji: The Next Level OST Henry Jackman Music On Vinyl