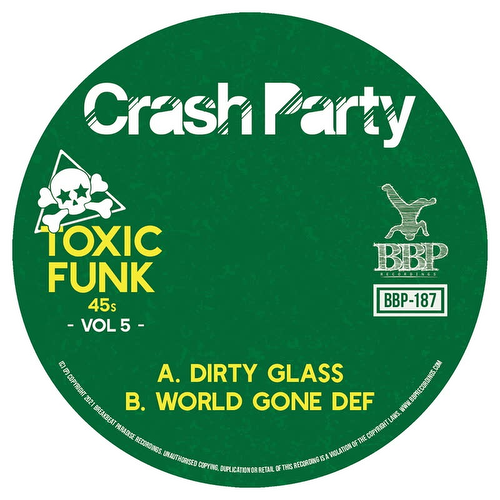 Breakbeat Paradise Recording is back with the fifth installment of the epic Toxic Funk – 7" donut series.

For the next 45 we have called upon Crash Party (one half of Hardly Subtle with Aldo Vanucci) to sprinkle his production magic over 2 funked up, sample led tracks to get any dancefloor moving!

Crash Party dropped his debut EP on the legendary Ghetto Funk label, with follow up EPs on Scour Records and Cuttin' It Fine Recordings. He's remixed tracks on the U.S. based labels Dead2Me and Roaring City. Crash Party's crowning glory, to date, was collaborating with Dutty Moonshine Big Band on the #metoo alternative anthem "Fever", from their top 40 album "City Of Sin"

We are chuffed to have Crash Party #crashtheparty with these 2 slices of breakbeat funk to get heads nodding and feet tapping.

Following up on Second Hand Audio's Vol. 4 release in the series, you are in store for some skilled sample selections, some classic funky breaks and a perfectly timed Hip-Hop vocals.

The lead track, Dirty Glass, sees the combination of "One Way Glass" with "Dirt Off Your Shoulder" blended together with extra beats and grooves for dancefloor flavour... A modern-day classic in the making!

On the flip side we go deeper into the world of funk with World Gone Def, a skilled re-editing of "People Make The World Go Round" as the main music accompaniment to the vocals of Hip-Hop anthem "Release Yo Delf". Add to this extra funky beats, vocal samples and a smidge of rock guitar sampling for good measure!

As the electronic funk scene changes and adapts, some things remain best untouched. The sample-based beats and grooves is here to stay and the sound of the Old Skool is still as fresh as it comes.