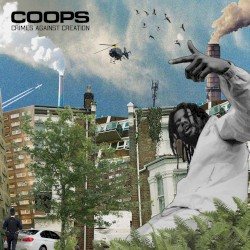 Seeing himself as a social commentator, Coops continuously draws inspiration from everything around him and is feeling more inspired than ever. Having signed to the label in 2018 he has already released 2 poignant albums and continues to create at rapid speed.

The 8-track project - which was made in just 4 studio sessions - is unlike Coops’ usual 14+ track albums both he and his fans have become used to. Coops turned the album around in record time to ensure his music was released during this unparalleled time in history. The homegrown beats come from his close friend and long term collaborator Talos who has produced almost all his beats to date.

In the opening track, ‘ Boom Biddy Bye’ Coops doesn’t waste a second in putting his fellow rappers through their paces. A block rapper with no one to please but himself, Coops professes that he barely listens to what other rappers release to ensure they don’t infiltrate and influence his own music. Highly appropriate for these times, title track ‘ Crimes Against Creation ’ is the stand out voice of this generation and his message to the world. ‘W arped perception, thwart connections, they force perfection, then claim the antidotes an injection...’ plays out and we begin to appreciate how the current situation is playing heavily on his mind. As the album progresses we get to see all sides of Coops’ personality with ‘Piss Poor’ reminding us of the raw gritty London lifestyle from which he has risen from, whilst ‘Profile’ demonstrates his softer more promiscuous side as well as touching on themes of fatherhood and online relationships.

Coops’ musical entry point begun by making music with his friends, but it wasn’t until he really looked at himself and the world around him when he decided he needed to go it alone, opening his mind and his solo stream of creativity which hasn’t stopped since. A self-proclaimed hermit he embodies the essence of a true artist and only finds comfort in doing what he loves, not what he is told.