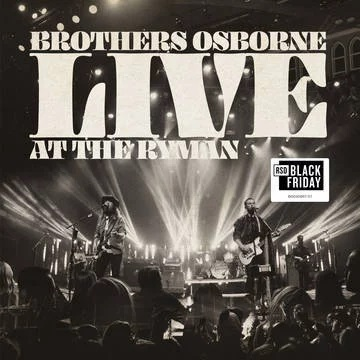 Live At The Ryman [Black Friday 19]

Double LP: these are limited to 1 per customer.

The first live album from the three-time CMA Vocal Duo of the Year and two-time ACM Vocal Duo of the Year, recorded at two sold out nights at the historic Ryman Auditorium in February 2019. Current CMA Duo Of The Year! 12 Tracks including the hit songs- “It Ain’t My Fault”, “Shoot Me Straight”, “21 Summer” and the #1 Song- “Stay A Little Longer”

Brothers Osborne currently reigns as three-time CMA Vocal Duo of the Year in addition to being named ACM Vocal Duo of the Year the past two years. Overall, Brothers Osborne have collected four CMA, five ACM trophies and stand as five-time GRAMMY nominees. The Maryland Natives are set to reunite with Chris Stapleton on tour later this fall and will also open select dates for Willie Nelson including the legendary Farm Aid on September 21.