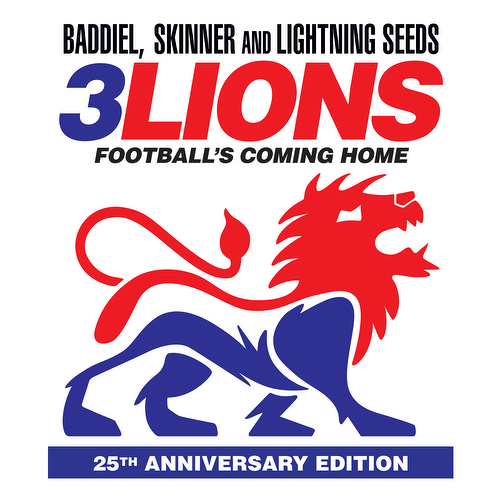 7": these are limited to 1 per customer

2021 marks 25 years since Baddiel, Skinner, and Lightning Seeds brought the iconic footballing anthem ‘Three Lions’ into the world. To celebrate the anniversary, Sony Music will be releasing a one-off limited edition 7” solid red vinyl with numbered sleeves on Friday 4th June, which will feature two versions of the anthem: ‘Three Lions’ and ‘Three Lions ‘98’ .

An earworm of a track written by Ian Broudie, David Baddiel and Frank Skinner which sums up the heartache and hope of being an England fan, became an instant number one in ‘96, with England fans up and down the country singing it before, during, and after games. In the years since its debut, the track has seen multiple releases and is the only song in existence to have become the UK number one four separate times with the same artists: two one-week stints in 1996, three straight weeks in 1998 for the remake, and again in 2018 during the World Cup held in Russia, where it made history in vaulting to number one from 24 in one week. Not just adored by England fans, ‘Three Lions’ has become a global footballing hit, topping Germany’s charts and is still frequently heard on German radio stations around the tournaments.

The anniversary campaign will focus on raising the profile of the iconic song and celebrating its legacy through media and socials.

Those familiar words “It’s coming home” will soon be on everyone's lips, with England opening up its Euro 2020 campaign against Croatia on 13 June. On this momentous anniversary, could it finally be coming home?