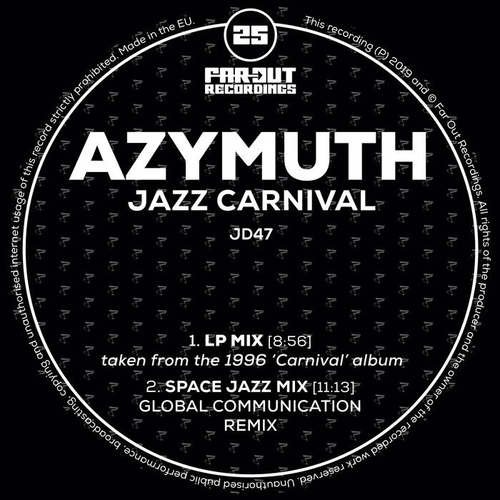 Celebrating the label's 25th Anniversary, Far Out Recordings presents a series of limited edition vinyl 12"s exploring its contribution to underground dance culture. These feature reissues of sought-after floor fillers, previously unreleased club bangers, along with a number of brand-new and exclusive productions from some key players in Far Out history.

First in the series is one of the label's all time most requested reissues, Global Communication's minimalist deep house remix of Azymuth's 'Jazz Carnival'. A typically timeless effort from the duo comprising Mark Pritchard and Tom Middleton, it's upheld its presence within the house/techno canon for over twenty years, played on the floor by the likes of Seth Troxler, Shanti Celeste, Gerd Janson, Sven Weisemann and more or less every head on the circuit in the late 90s. The A side presents the original LP version of Azymuth's 1996 future jazz redux of their all-time classic instrumental disco funk hit 'Jazz Carnival', which originally appeared on Azymuth's first full-length venture on Far Out, Carnival (1996).

Presented in a special 25th Anniversary house bag with a refreshed label design, the full-length 12 minute version of this legendary 12" has been re-mastered from the original DAT and pressed to heavyweight vinyl, as well as being made available digitally for the first time.

More Items From AzymuthSee all