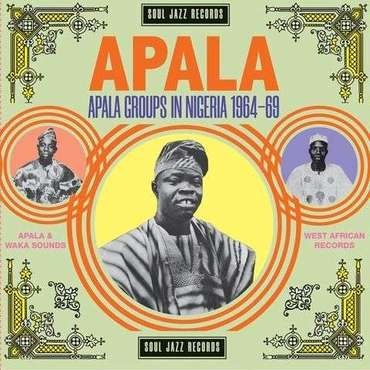 Soul Jazz Records’ new Apala: Apala Groups in Nigeria 1967-70 is the first ever collection of Apala music to be released outside of Nigeria.

The album focusses on a wide selection of recordings made in Nigeria in the 1960s, a time when Apala music was at the height of its popularity. Apala is a deeply rhythmical, hypnotic and powerful musical style that combines the striking nasal-style vocals and traditions of Islamic music, the Agidigbo (thumb piano) and the equally powerful drumming and percussion rhythms and techniques of the Yoruba of Nigeria.

The most significant figure in Apala music is undoubtedly Haruna Ishola, who features throughout this album. Ishola holds an almost mythological status in his role as populariser of Apala music in Nigeria. Ishola’s singing was believed to be so powerful that, without proper restraint, it could kill the recipient of his music.

Apala is a popular music that also functioned as a form of cultural resistance - Apala music involved no western instrumentation and is sung in the Yoruba language, its aesthetic an implicit cultural rejection of the British Empire’s colonial rule over Nigeria which lasted from 1901 until independence in 1960.

Apala music was popular and widely accepted in Nigeria due to its philosophical and profound lyrical content alongside the complex rhythmic patterns of this heavily percussive style, which highlighted many of the percussion instruments of south-west Nigeria.

Apala is one of a number of popular urban styles of music that came out of Nigeria in the 20th Century and sits alongside the more well-known (in the West) styles of Fuji, Highlife, Juju and Afrobeat. Of these modern forms Apala remains perhaps the most ‘roots’ style (sometimes described as ‘neo- traditional’) due to the authenticity of its sound. It has similar Islamic roots to other neo-traditional styles of Nigeria - including Waka and Sakara - examples of which are also included on this collection contextualising the music of Apala.

These recordings were originally made and released locally by Decca and EMI Records as well as a variety of independent labels in Nigeria and have never been released outside of the country before. Soul Jazz Records are releasing this album on CD and deluxe double Gatefold vinyl with digital download code, slipcase and booklet, both containing full text and photography.