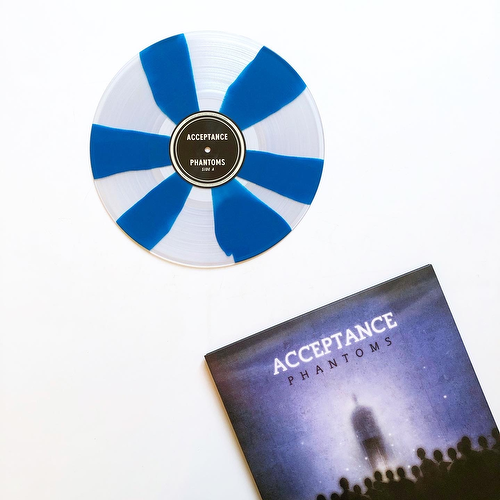 "Over seven years ago, in July 2013, Zack and I started Bad Timing Records by pressing Acceptance’s Phantoms to vinyl for the first time. I remember everything about working on that release — all the careful planning, working with the band to promote it, wanting to make sure we’d be able to ship the records as soon as we put them on sale. It was exciting and definitely scary, doing that first release. Phantoms wound up moving through its 1,000-unit first pressing in about four hours, then we saw another 1,000 units go pretty quickly in a second press a while later. Now, sixty some-odd releases later since BTR-001, we’re excited to revisit this awesome record we hold so closely to our hearts with a special 15th-anniversary third pressing."

"We get questions about making more of Phantoms all the time, and we’re pleased to be presenting what we think is our best pressing of the album yet alongside the band. For the 15th anniversary of the original album release, we’ve updated the packaging to a gatefold jacket that features all the lyrics and liner notes that were previously included on an insert. We’ve also got two new vinyl variants (pressing info listed below) that recall the original variants, but in our opinion … raise the bar a little bit." - Bad Timing Records

Valencia We All Need A Reason To Believe Bad Timing Records

Snapped Ankles Forest Of Your Problems The Leaf Label