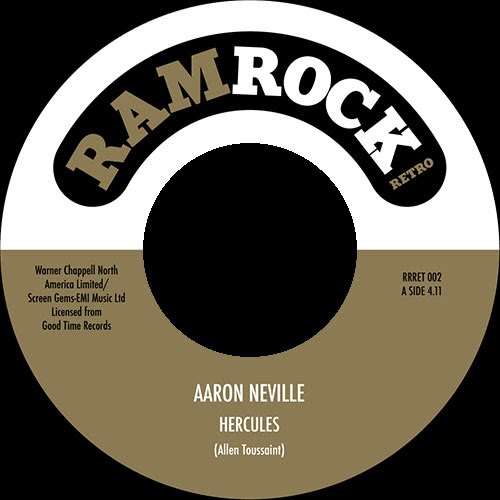 Hercules b/w Use Me

Hot on the heels of Ramrock Retro’s debut release – RRRET001 – Gladys Knight & The Pips – Ramrock Retro is insanely delighted to present their next release – the superb double sider of Aaron Neville’s ‘Hercules’ and Al Jarreau’s ‘Use Me’.

Recently covered by Ramrock artist, Ghetto Priest, Aaron Neville’s 1973 classic ‘Hercules’ needs no introduction but here’s a few facts. Originally released on Mercury, the track was co-produced by New Orleans luminaries, Allan Toussaint and Marshall E Sehorn. ‘Hercules’ enjoyed a massive renaissance in the mid 80’s on the ‘Rare Groove’ scene and was repressed 16 years ago in 2005 on Jazz Man Records.

Al Jarreau’s ‘Use Me’ comes from his 1979 ‘Lonely Town, Lonely Street‘ and is a wonderful cover of the Bill Wither’s track. ‘Use Me’ has never previously been released as a 45 so this is its UK debut.

Both tracks have been beautifully remastered by Darren Morris at North Street West.