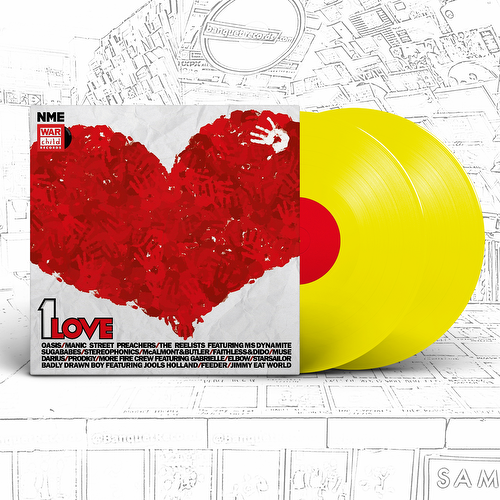 In keeping with the spirit of the compilation, our cut of sales of this record (so that's £6 an LP) will also be donated to WarChild.

Originally released in 2002 in partnership with NME to celebrate their 50 th anniversary and 50 years since NME printed the first ever singles chart in the UK. 1 Love saw the cream of British artists come together to pick their favourite number one to cover.

Having appeared on the 1995 HELP album, Oasis continued their support of War Child with an acoustic rendition of Slade’s Christmas classic ‘Merry Xmas Everybody’. Stereophonics chose ‘Nothing Compares 2 U’ with Kelly Jones’s gravelly vocal complementing this stripped back version of the track written by Prince, performed by The Family and taken to number one by Sinead O’Connor in 1990.

Faithless and Dido stamped their mark on Beats International’s ‘Dub Be Good To Me’ whilst Jimmy Eat World transformed Prodigy’s ‘Firestarter’ stripping it back but keeping the dark and ominous mood of the original. The Prodigy themselves paid homage to Liam Howlett’s heroes The Specials with their own brooding version of ‘Ghost Town’.

The Manic Street Preachers joined Oasis in appearing on their second album for War Child with a cover of ‘Out Of Time’ and Muse began their journey with the charity by adding their unique spin to 1964 number one ‘The House of the Rising Sun’ by The Animals.

Elsewhere Elbow take on Thunderclap Newman with a low-fi cover of ‘Something In The Air’, there are contributions from Starsailor, Badly Drawn Boy teams up with Jools Holland and his Rhythm and Blues Orchestra and Feeder give a haunting, pre- John Lewis cover of ‘The Power of Love’.

1 Love is part of a series of four releases by War Child Records making the amazing music artists have donated to the charity available on DSPs and vinyl for the first time. All proceeds from these releases will directly fund War Child’s life saving work with children affected by conflict.